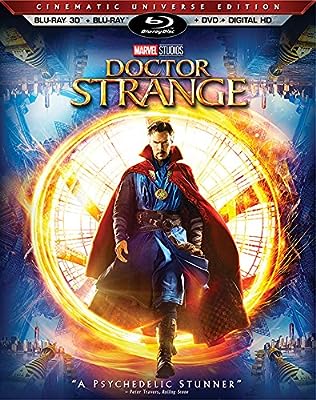 Price: $44.99
As of 2020-04-07 08:10:16 UTC (more info)
Product prices and availability are accurate as of 2020-04-07 08:10:16 UTC and are subject to change. Any price and availability information displayed on https://www.amazon.ca/ at the time of purchase will apply to the purchase of this product.
Availability: Not Available - stock arriving soon
Buy Now from Amazon
Product Information (more info)
CERTAIN CONTENT THAT APPEARS ON THIS SITE COMES FROM AMAZON SERVICES LLC. THIS CONTENT IS PROVIDED 'AS IS' AND IS SUBJECT TO CHANGE OR REMOVAL AT ANY TIME.

A Strange Transformation -- Open your eye to a new dimension of the Marvel Cinematic Universe, and see how the filmmakers brought one of comic books' greatest characters to life|Strange Company -- Find out what it's like for the cast to work on a Marvel film, and how Director Scott Derrickson engineered one of the most ambition, imaginative films ever|The Fabric of Reality -- Take a closer look at the movie's extraordinary sets, meticulously crafted costumes and amazingly detailed production elements|Across Time and Space -- Explore the endless hours of dance and fight choreography the actors endured in preparation for their physically demanding roles|The Score-cerer Supreme -- Join composer Michael Giacchino and a full orchestra during live recording sessions, and experience the movie's mind-bending music|Marvel Studios Phase 3 Exclusive Look -- Get an early peek at Marvel's spectacular upcoming films, including MARVEL STUDIOS' GUARDIANS OF THE GALAXY VOL. 2, THOR: RAGNAROK, BLACK PANTHER and AVENGERS: INFINITY WAR|Team Thor: Part 2 -- See more of the hilarious partnership between Thor and his roommate Darryl in this satirical short|Audio commentary with Scott Derrickson|Deleted Scenes|Gag Reel